Inside The Brand: CLE Rocks NYE 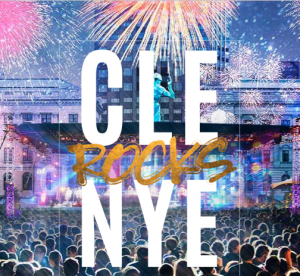 In the first entry of our “Inside the Brand” series, we look at Cleveland Rocks New Year’s Eve, an annual NYE celebration that drew more than 10,000 guests and 1,000 VIPs in its second year.

“When we set out executing this vision, it really was about providing a signature event that was uniquely Cleveland,” said Teleange Thomas, co-chair for CLE Rocks NYE. “Our long-term goal was to build this out to have every space downtown activated – music, food, fireworks, arts and culture.”

But execution is only half the battle – branding and marketing are equally important in realizing Thomas’ goal of representing NYE in a way that brings the best elements of the city together.

Drew Carey kicked off the inaugural event last year, beginning a trend of hosting Cleveland- and Ohio-oriented artists that Thomas hopes to continue.

“This year’s theme is, ‘For Cleveland, by Cleveland,’” Thomas said. “We try to integrate the theme and tone into the overall branding every year.”

Creating a new, annual event that draws the kind of crowds this one has is a challenging feat for any organization, but Ohio Homecoming – the umbrella organization for CLE Rocks NYE – has to contend with one of the biggest mainstay events of the year in New Year’s Eve.

Thomas and company have avoided the baby-faced impression new events like CLE Rocks NYE can give off with some razor sharp marketing.

The banner for this year’s CLE Rocks NYE website is a modern take on old-time glamour, evoking images of Great Gatsby and West Egg with a throng of people packing the Mall One grass and a straight-on shot of the concert stage, backed by Cleveland’s iconic Fountain of Eternal Life monument.

The chosen photo filter gives off a vintage vibe, making the event feel like a longstanding Cleveland tradition. The event logo combines the clean, minimalist look of a sans serif font using the “CLE” and “NYE” letters, with the word “rocks” written in an urban, graffiti-esque font that makes the total package pop.

The media pass sported the same logo, backed by a weathered-looking, sepia-toned concert photo that gives the same nostalgic feel as the site banner.

A ton of promotion led up to the event. The site looks super cool and encourages user interaction. Site visitors could book tickets to the event, book hotel rooms and plane tickets to CLE, and follow and like the flutter of social media. The social media surrounding the event was really impressive. It showcased the final event with edgy photos and top notch press, and served to really spearheaded the event promotion.

Performers and attendees were avidly posting about the event leading up to NYE. The digital marketing paved the way for more widespread marketing. As the final date grew near, they used the local news and radio to promote the event. The synchronized use of multiple channels successfully brought the brand and intended experience to life and that energy carried into the evening.

Though the “CLE Rocks NYE” brand will stick for the time being, Thomas intends for each year to have its own theme and looks forward to 2016’s shindig, where the numbers “216” will play a prominent role in the promotion of the event.

“It’s not quite often that we have that moment,” Thomas said. “I think it’s uniquely made for us. We have all these great public spaces, so it would be great to have all of them activated for one common celebration. I would highly suggest that you be there so you can experience it for yourself.”