No harm, no foul

Some Netflix users on Verizon’s network were greeted with this message during peak network congestion times when loading a video:

In a letter to Netflix General Counsel David Hyman, Verizon Executive VP and General Counsel Randal Milch wrote, “The impression that Netflix is falsely giving our customers is that the Verizon network is generally ‘crowded’ and troublesome.”

Considering Verizon is ranked 15 out of 16 in Netflix’s USA ISP speed index, it’s fair to assume any damage to Verizon’s reputation was their own doing. This news comes after Netflix struck a deal with the telecom mogul in April to allow Netflix direct access to Verizon’s network, bypassing interconnection points between ISPs and transit providers.

Just to reiterate – Netflix just paid Verizon an undisclosed (but probably large) sum of money to directly peer off Verizon’s network, Verizon’s customers are getting the 15th-worst connection speeds of any major ISP in the country and Verizon wants to sue Netflix for apparently pointing this out to users.

Rather than investigate the cause of the congestion, run speed tests or perform basic troubleshooting of any kind, Verizon chose to threaten Netflix with a lawsuit if the damaging verbiage isn’t removed from Netflix’s stream message, a move expected to garner immense support from customers completely oblivious to Verizon’s blatant hypocrisy.

The nerve of some companies…by which, again, I mean Verizon. Not Netflix. Cool? Good.

Don’t be blind to your reputation. Your brand will thrive – and inevitably suffer – in the marketplace over time. Blindly boasting during the low points is an enormous turn-off to customers. Since ISPs rarely compete for territory, Verizon benefits from a virtual monopoly on multiple regions in the U.S. and can afford to be lambasted in the press for making moronic threats and overblown demands. They’re often the only option for consumers in a given area.

Your business likely doesn’t have that luxury. Your customers are intelligent – they know when they’re being lied to, they know when you put up a front and they know when your “sterling reputation” has taken a nosedive, despite every effort from you to say (not prove) otherwise.

Learn to recognize hypocrisy and eliminate it from your messaging. Don’t pull a Verizon (do, however, make that a regular phrase).

B2B marketing is all about lead generation, so the idea of a gated content offer is extremely valuable to B2B companies. Remember, a content offer 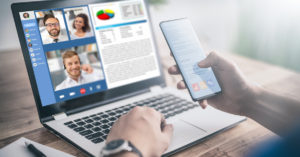 How to Use Zoom Meetings

One of the easiest ways to connect with your audience digitally is through a Zoom Meeting. Many of us have been using Zoom for board,