Start-ups have nothing to do with originality

Your temperature-regulating beer stein with LED indicator just exploded on the scene.
Beer Advocate, Craft Beer and other major beer outlets have hyped the living crap out of your start-up for months. Craft beer fanatics camped out in front of stores for days, waiting to snap up the hottest gadget of the year and wave it at jealous friends and family members, sloshing frosty suds all over themselves in the process.

Cheers to your fictional success! Now ask yourself if you created something original. I’d argue you redefined the traditional beer glass by combining existing, readily-available technology, but generating the fictional hype you did probably required a well-executed marketing strategy (or some furiously fast word-of-mouth).

Let’s get existential for a second: is achieving “originality” even possible or do we really mean “innovation” when we say “originality?”

Sources in a May 2012 Forbes article posit originality is an illusion, at least in the technology industry. “In the tech world, there are no truly original ideas,” Aaron Shapiro, CEO of global brand strategy agency Huge, told Forbes. “Everything is somewhat similar to what someone else is doing. So, you need a way to communicate what your start-up does with a special twist.”

Even in writing – an area far-removed from Silicon Valley start-ups – the same concept applies. Some argue Chuck Palahniuk’s debut novel Fight Club epitomized originality, but Palahniuk himself admits in his second novel, Invisible Monsters, “Nothing of me is original. I am the combined effort of everyone I’ve ever known.”

If we’re all a collection of experiences, influences and memories that meld together before we regurgitate something resembling a new idea, then achieving originality becomes a pipe-dream.

It’s critical that start-ups differentiate between innovation and originality, and accept the latter is nigh impossible to achieve. It’s critical to shift focus to branding and promotion, which come immediately after – sometimes even before – innovation takes place. Considering how many people are likely developing something similar, it’s too late wait until a product’s release to start marketing it.

Here’s a quick checklist to get you started on a marketing plan:

If you can answer those questions, you’re in good shape to start outlining your branding and promotional strategy. We’ll cover how to execute that strategy in the next MEDIA MATTERS. 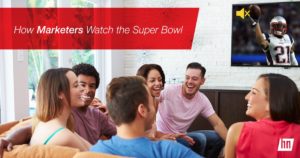 It’s safe to say that 85% of our office watched the Super Bowl last night for the commercials and tuned out for the actual game.

From Online To In-Person- 8 Ways to Engage

Hey Now! Media helps companies gain a competitive edge and grow their business. One important way to do this is through engagement. It’s how you